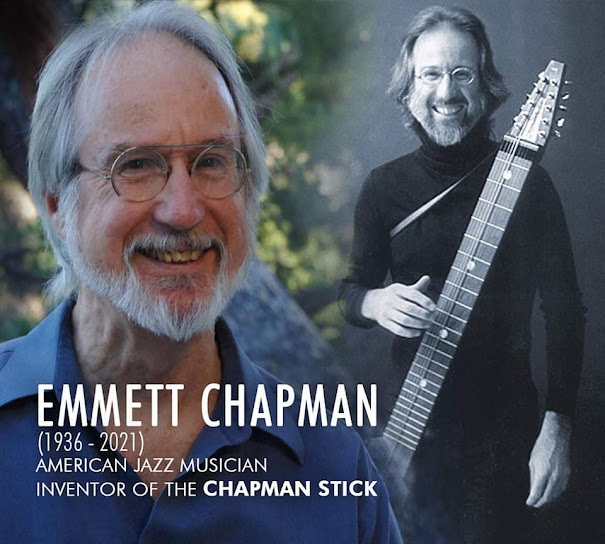 Back in Febuary of 2003, I wrote a letter to Stick Enterprises...

'I was in the lobby of a large motel somewhere in Southern California. The hotel had lost our reservations and we needed a place for our youth group to stay. Everything in town was booked! The hotel manager apologized for the mix up and offered to let us stay in the lobby area. The hotel would provide cots and sleeping bags. They would even treat us to breakfast! I discussed it with some of the other chaperones and we agreed that it was a good idea. Besides, where else could we go? As the kids bedded down for the night, I was approached by one of the teen boys. He had a strange looking instrument in his hands. As he handed it to me he said: "Juan, you're a bass player, right? Can you tune this for me?" I took the instrument from his hands and studied it in amazement. I had never seen anything like it. Ever. I held it close to my body and started to tune it up as I felt the notes vibrate through my chest. To my amazement, I found that not only did I know how to tune this beautiful instrument, but I knew how to play it as well! I was immersed in the beauty of the experience.

A few days later, I was watching Peter Gabriel's video "Secret World" and was glued to the image of Tony Levin playing the instrument I dreamed about. True story. I am a Mexican of Yaqui Indian blood. Visions can be very powerful? My wife and I have agreed that I should get a Stick this year. Could you put me on your waiting list for a used Stick? A 10 or 12 will do. I am not too picky as to the wood. I just want to hold one in my hands!'

As it turned out, I ended up buying a 10 string polycarbonate Stick® from a gentleman named Mark who was located in NY. We worked out a price and a few days later I received my long awaited Stick in it's original wood case. Adorning the case was a blue Gordian Knot decal. I found out later that the symbol was used by Robert Fripp's League of Crafty Guitarists. Apperantly, the original owner, whom name escapes me, was a member of The League and the 1st owner of this particular Stick #2464. I am the 3rd owner. I found this out when I called Stick Enterprises to order my 1st set of strings and a soft case. Yuta Chapman, Emmett's wife, answered the phone. She asked for my Stick's serial number and then put Emmett on the phone. After polite introductions and pleasantries were exchanged, he began to give me a history of my Stick, offer up tuning and gauge suggestions, setup tips, and a hearty "Welcome to the family".

And so began my amazing journey on this amazing instrument. All thanks to the incredible vision that Emmett had back in 1969. Over the next few years, I would converse with Emmett via emails and phone calls. He was always interested in what I was doing with the Stick. Talks about solo shows at art museums turned into discussions about turning metal sculptures into "sympathetic resonant art" that would respond to the different notes played on the Stick much like the sympathetic strings on a sitar. How the audience would be encouraged to "play" the sculptures and become part of the experience on a participatory creative level and not just as a consumer. He encouraged me when I started my podcast, "Strada-Sphere Radio: Stick Music and Nuthn' But!". A podcast in both English and Spanish that I hosted alongside Shane Carey who stepped in and took over when I was having technical issues with my recording rig. Music from all over the globe arrived in my inbox, both virtually and in physical form. We had a good run. But alas, life in all its unexpected turns put the podcast on hiatus...for now.

There was the time when Emmett, Yuta, and Dan Chapman (Emmett;s brother, filmmaker, multimedia artist and damn fine harmonica player) scrambled to send out CDs, books, pamphlets, posters, etc for my friend and fellow Stickist Jeremy Birdsall and myself to use for our presentation during the Guitar! The Instrument That Changed The World exhibit at the Orlando Museum of Art. This multi-media, traveling exhibit was put together by The National Guitar Museum. Jeremy and myself, along with drummer Reed Hayes, gave a one hour presentation that included the 10 string Stick, the 12 string Grand Stick, and the NS Stick. The audience was treated to an exclusive sneak peek of Dan Chapman's personal labor of love, the documentary "Emmett". The Chapmans were ever the gracious souls in constant contact with us and just as excited as we were.

Emmett was not your average entrepreneur. He was a musician/artist 1st and foremost. He challenged himself on every level in that sense. Not satisfied with convention, he ventured into playing techniques that would eventually require an instrument to fully realize that technique. He built his1st prototype in 1969 and by 1974 the 1st Stick was delivered to a customer. Since then Stick Enterprises has produced several different models (8 so far) in various tunings. Thousands of recording in every genre and across the globe have featured the unique sound of The Stick.

He was a visionary and accidental revolutionary. He is one of only 3 inventors who created a wholly new musical instrument that truly changed the course of music (Adolph Sax with the saxophone and Bartolomeo Cristofori and his 'amazing loud and soft machine', the pianoforte.). That is no small, nor rare, feat.

Emmett changed a great many things in the landscape of the musical world. But his most profound contribution to those of us whom took to his inventive playing style and his creation was his generosity. He gave of himself whenever he could. Be it in a phone call, an e-mail, a good conversation, a jam session, or a heart felt "thank you". He was genuine all the way.

In 2006 I added an NS Stick to my collection..and again my life changed.

Thank you Emmett for sharing your vision, your gifts, and yourself. My approach to music has forever been changed. I am challenged daily and gladly by your gift to us all. But I was affected the most by your friendship.